CALGARY – Generous contributions continue to help with the construction of the New Central Library. A 100,000-piece LEGO model of the building was revealed Saturday. 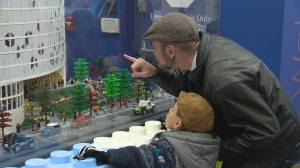 Mike Shaikh and his wife Linda gave a $1-million gift to the Calgary Public Library Foundation to enhance the New Central Library.

Shaikh, a senator-in-waiting, says he is honouring wisdom handed down by this father many years ago.

“He said learn, earn and return. My family and I believe we must give back to the community we live in.”

The money will go towards a welcoming gallery, which will be named after Shaikh. The foundation hopes to raise $75 million in private donations – contributing to the $245-million project. So far, more than $8 million has been raised.

The mayor was on hand for Saturday’s announcement, encouraging Calgarians to help support the library through a Kickstarter campaign. Limited edition ‘Nenshi’ figurines are up for grabs for donors.

“It can be yours for a $100 donation to the library. You can have your very own little ‘me’ to stick pins into,” says Mayor Naheed Nenshi.

The campaign will help build an IdeaLab, a public space where entrepreneurs and innovators can create in the new library.

The city has finished encapsulating the LRT line under the job site. Construction work now begins on the 240,000 square-foot facility.