Uninterrupted is a visual arts display underneath the Cambie Street Bridge with daily shows after sunset – A Wild River, An Urban Bridge, A Cycle Uninterrupted Through The Ages. Full details →

Vancouver has long been a city envied for its ability to offer the best of both worlds – a major urban centre with a unique connection to nature. And this summer, the two will come together, as UNINTERRUPTED brings a wild salmon-bearing river right into the heart of Vancouver. It’s a cinematic spectacle that has to be seen and experienced to be believed! Click here to watch the teaser trailer.

UNINTERRUPTED premieres on June 28th and is part of Vancouver’s celebration of Canada 150+. Spectators will find themselves immersed in the extraordinary journey of migrating Pacific salmon unfolding around them on the undercarriage of Vancouver’s Cambie Bridge. A blend of cinematic storytelling and high-tech art installation, the 25-minute piece is achieved with original cinematography digitally mapped and projected onto the bridge. A soundscape accompanies the projected images, uniting an originally composed score with audio from the natural landscape. Viewing is from Coopers’ Park at the bridge’s north end, 5 nights a week from June 28th to September 24th. 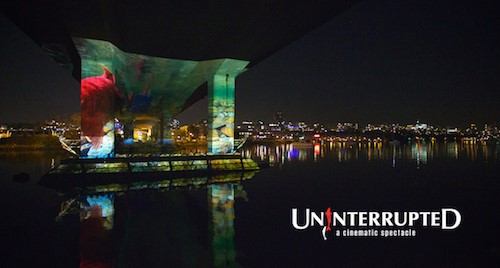 Connecting urban audiences with a cycle that has endured – uninterrupted – through the ages, this cinematic work of art stands to remind us of nature’s beauty, resilience, and vulnerability. The companion website, uninterrupted.ca will extend the experience; connecting audiences to the vast network of people working to restore salmon habitat, places they can see salmon in the wild, and ways to get involved with salmon conservation.

A Canada Wild production, UNINTERRUPTED was conceived by acclaimed Vancouver director Nettie Wild, who was inspired by a visit to B.C’s Adams River during a peak salmon run. Wild’s earlier films with producing partner Betsy Carson include KONELINE: our land beautiful and FIX: the Story of an Addicted City. The evolution of UNINTERRUPTED into a groundbreaking multi-media event has taken a cross-disciplinary team, and a committed group of partners to realize the project. Joining Wild and Carson at the helm of this project is producer Rae Hull. Together they lead a group of outstanding artists and specialists, including editor Michael Brockington, creative technologist Anthony Diehl, cinematographer Athan Merrick and composer Owen Belton.

Presenting partners Vancity credit union and the Gordon and Betty Moore Foundation came in as early champions of the project, as did community partners: the Pacific Salmon Foundation, City of Vancouver and Tides Canada. UNINTERRUPTED also received unanimous approval from the Vancouver Board of Parks and Recreation for the use of Coopers’ Park.

Funding has also been generously provided by the Government of Canada and the Canada Council for the Arts, the Real Estate Foundation of BC, and individual champions. First Nations communities in locations throughout BC have been consulted over the course of the project.

The measures come a day after officials warned that Britain faced an exponentially growing death rate within weeks… twitter.com/i/web/status/1…

Children of the 6,600 members of the Yi ethnic minority who were moved to the new village now attend kindergarten i… twitter.com/i/web/status/1…

Forecasters and officials reassured residents Beta was not expected to be another Hurricane Harvey or Tropical Stor… twitter.com/i/web/status/1…