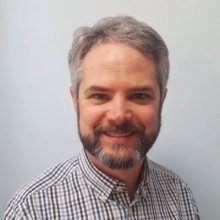 He is perhaps most well-known for his ongoing work as a radio play-by-play announcer for the QMJHL’s Moncton Wildcats and Saint John Sea Dogs, with more than 1,000 regular season and playoff games called.

Originally from Chatham, Ontario, Tim moved to Halifax in 2005 to help launch radio station News 95.7 as a weekend anchor and weekday reporter. Less than a year later, he moved to News 88.9 in Saint John in a dual role as an afternoon news anchor and reporter while serving as the Sea Dogs’ play-by-play announcer.

Tim joined the Sea Dogs full-time in 2013, adding the title of media and communications manager to his radio duties until early 2018. He comes to Global News following a brief stint with CBC News Saint John.

His broadcasting career also includes stops in London, Ontario, between 2002 and 2005, as a news anchor, reporter and operator with AM 980 CFPL, and as a video journalist with A-Channel/CFPL-TV and Rogers Television.

Tim lives in Saint John with his beautiful wife, Trish, their son, and his two stepdaughters.