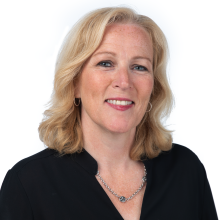 With more than 25 years as a radio announcer and two years as host of her own TV show, Sue Deyell loves talking to people!

It was a passion for writing, though, that earned Sue a degree in English from York University. She later found the Radio and Television Broadcasting program at Seneca College – sparked by a newspaper job advertisement for voiceover artists – and graduated with honours.

An afternoon news job in Brockville, ON lured Sue away from her hometown of Toronto (Go Leafs Go!) and after stops in Kingston, ON and Moncton, NB, Sue made Calgary her home in 1998 (Go Flames Go!). Sue remembers her early days in media fondly: “Move. That’s the advice I give to all new graduates,” Sue says. “That’s where you get better, hone your craft and where you make great friends. And the added bonus is, they treat you like a rockstar in a small town!”

Sue loves a new challenge, and taking on the world of talk radio has given her just that. She says the focus and quick thinking needed to host The Morning News on 770 CHQR is almost as exciting as getting to work alongside Andrew Schultz every day.

Sue runs her own master of ceremonies business called Professional MC, is co-owner of Sportsbras.ca, is on the board of directors for Women Talk Canada and is a very busy wedding officiant.

Her extracurricular talents include hosting dinner parties, coaching fastball and — her favourites — being a wife to Brigitte and a Mom to her two young children, Alexandra and Luke.

RT @GlobalBC: The screening decision said the worker failed to establish that his objection to masks was "grounded in a sincerely-held reli…

People are preparing to return to “normal life” as more Canadians receive COVID-19 vaccines, but many have said the… twitter.com/i/web/status/1…