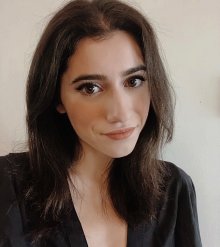 She got her start as a journalist in 2014 as freelancing in the Middle East extensively covering the Israeli-Palestinian conflict during the Gaza War.

More recently, Emerald worked as a senior writer with CBC News before joining Global News, as well as a reporter-editor with the Canadian Press and a breaking news reporter with the Toronto Star.

Emerald currently holds two bachelor’s degrees, one in journalism from Ryerson University and another in communications and film studies from Carleton University.

She is fluent in movie quotes and appreciates a well-illustrated comic book series when she sees one.

‘Canada stands with our friend and partner India as we work to overcome the devastating impact of #COVID19,’ Canada’s high commissioner to India tweeted.

Medical supplies to India will be airlifted over by the Canadian Armed Forces.

Rangers will be stationed in Dryden until May 18.

The AstraZeneca vaccine has been recommended for Canadians aged 30 and up, but experts say demand for the shot is outstripping the supply.

The Moderna COVID-19 vaccine doses will be distributed throughout Canada by the end of the week.

The news comes several days after Health Canada announced it was postponing the country’s first shipment of J&J vaccines due to quality control issues.

Dawe is leaving his post early, after it was reported that he had submitted a character reference letter in 2017 to a judge for a service member convicted of sexual assault.

Only two other provinces offer paid sick leave, while many others are either looking at introducing their own program or are calling on the federal government to step in.

COVID-19 vaccine certificates ‘to be expected’ as part of pandemic, Trudeau says

Trudeau said the federal government was coordinating with partners and allies around the world to determine what vaccine certificate rollout would look like.

Living in Myanmar during a military coup like a ‘dystopian world order,’ woman says

Myanmar, formerly known as Burma, has undergone three military coups since gaining its independence from the British Empire in 1948.

The move greatly expands on the Biden administration’s action last month to share about 4 million doses of the vaccine with Mexico and Canada.

Canada is also struggling to contain rising COVID-19 cases as the country undergoes a third, variant-driven wave of the pandemic.

No clear reason for Russian escalation in Ukraine — but it will test Biden, experts say

The Ontario government updated its COVID-19 pharmacy vaccine listings on Friday to show which pharmacies are now pr… twitter.com/i/web/status/1…

A coronavirus variant originally identified in India has been detected for the first time in Bangladesh, health aut… twitter.com/i/web/status/1…