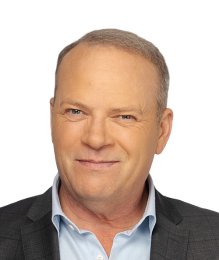 Daryl McIntyre is an award-winning reporter and anchor with nearly four decades of broadcasting experience. Now, he’s brought that love of telling and hearing stories to 630 CHED Mornings.

Raised in Edmonton and Vermilion, Daryl attended NAIT’s Radio and Television Arts program and was named one of NAIT’s top 50 alumni over 50 years. He was also honoured as Canada’s best local TV news anchor at the Canadian Screen Awards in 2017.

D-Mac brings a varied background to the 630 CHED airwaves with roots in urban and rural life. He lives on an acreage just outside city limits with his wife Mary, two dogs, two cats and two horses.

Joining the celebrated team at 630 CHED is another broadcasting dream come true and to be able to follow in the footsteps of many legendary broadcasters is an honour and responsibility Daryl takes very seriously.

Daryl’s mantra is to take the job seriously but himself… not so much. He’s a campfire guitarist, animal lover and motorcyclist. So if you ask, he may just strap the guitar on his back, hop on his bike (1976 Honda CB 750) and ride over to pet your dog.