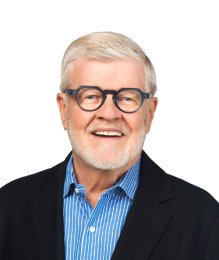 There are few names as eponymous to radio in Edmonton as Bryan Hall. A mainstay on the airwaves, Hallsy, as he’s affectionately known, has been in radio for over 60 years.

His voice was heard calling the plays for the Edmonton Oilers, as the play-by-play announcer for Edmonton football for 45 years, as the race caller at the horse races and for various morning and afternoon shows over the years. Bryan is credited with introducing the “open-line” sports format to Edmonton.

In 1989 Hallsy was honoured by being inducted in to the Canadian Football Hall of Fame, then was inducted into the Alberta Sports Hall of Fame in 2004.

When he’s not on air, Bryan works as a sales associate, as he has for over 50 years. He can be heard voicing a number of commercials on Corus radio.