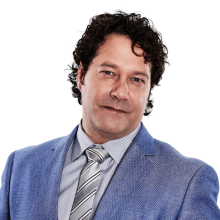 Bill Welychka has over 25 years of extensive TV broadcasting experience. (He started when he was 4??!!!?). His career began at MuchMusic in Toronto where he was an award-winning interviewer, host, producer and editor. He would go on to become MuchMusic’s/ MuchMoreMusic’s longest running on-air personality. Bill has travelled the globe countless times, conducting over 3,000 interviews with music legends, actors, athletes and royalty. He spent 6 years in Ottawa being a Weather Anchor and hosting the fun and popular “Bill’s Excellent Adventures”.

Bill’s most recent Adventure finds him in Kingston, where he hosts and produces CKWS Daily on CKWS-TV.

“I learned years ago, the size of the audience simply doesn’t matter. What’s important to me is connecting with the audience that is available, and being proud of the product we’re offering. I love the people here at CKWS and their work ethic and the lack of egos…we all share Corus’ values. It’s an awesome team, and I’m stoked to be a small part of it!”

To contact Bill, just send him an Email, or find him on Facebook. He reads everything, so be nice.

05:41
The Morning Show on CKWS
GNM chats with Brian Porter, one of the subjects of the new doc ‘From Earth To Sky’

05:28
The Morning Show on CKWS
Global News Morning chats with food expert and Mom In The Know Julie Findlay

06:44
The Morning Show on CKWS
A preview of the new short doc ‘Why We Fight’

05:24
The Morning Show on CKWS
Kingston author shares her story of tragedy and hope

05:53
The Morning Show on CKWS
How bidding on a Tragically Hip signed guitar will benefit KGH’s neonatal dept.

06:38
The Morning Show on CKWS
Global News Morning chats with Matt Lee
Entertainment
May 13, 2021 4:35 pm
The Tragically Hip to reunite for performance with Feist at 2021 Junos

The band will be reunited on June 6 at the 50th annual Juno Awards and will play a song with Feist.

Kingston remembers Gord Downie one year after his death

A look back at Gord Downie’s legacy one year after his death.

“I’m beyond thrilled that now I can provide for my daughters’ future in a way that I couldn’t have otherwise." trib.al/FK9cJnS

“The frustration right now is the mixed messages that we’re getting from NACI. One day it’s good, one day it’s bad,… twitter.com/i/web/status/1…

An RCMP police service dog was killed Thursday in what is still an ongoing situation in northern Alberta involving… twitter.com/i/web/status/1…