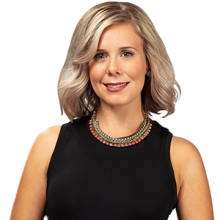 A proud Maritimer, Alyse has worked in television for over a decade as a reporter, producer, anchor, co-host, and weather anchor. Alyse spent the majority of her career at CTV Atlantic, before stepping away from television to take on a public relations role in 2018.

“I’m thrilled to be returning to morning television, and to be joining the Global News team. I take great pride in sharing the stories that come out of our region, and I value the opportunity to connect with viewers.”

Alyse was born and raised in Bedford, N.S. She studied at Dalhousie University and Acadia University before settling in at Nova Scotia Community College to pursue broadcast journalism.

When she isn’t working, Alyse can typically be paddle boarding, running, spending time with family and friends, and exploring the Maritimes.

JUST IN: Nova Scotia is pledging money toward restarting the tourism industry, which lost $1.6 billion in revenue i… twitter.com/i/web/status/1…

Police say he was charged with resisting arrest during a “Freedom Nova Scotia” rally. trib.al/5VNrg4o