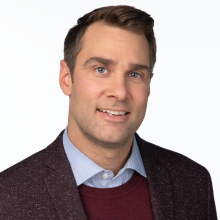 Jordan Witzel loves the serious challenge of forecasting weather in the foothills of Alberta as Global News Calgary’s Meteorologist.

Witzel grew up in Vancouver, BC and earned his broadcast diploma at the British Columbia Institute of Technology (BCIT) before moving to Drayton Valley to begin his career in radio. Following a year of radio in central Alberta, he made the jump to television weather in Winnipeg. After several years of forecasting harsh winters for Manitobans, it was time to get back to the mountains at Global News Calgary.

Highlights of Witzel’s career include the opportunity to give back to military veterans by raising nearly $60,000 for the Calgary Poppy Fund in 2013 by suffering through a grueling military boot camp hosted by former U.S. Navy Seals. He’s also had the opportunity to fly a CF-18 under the watchful eyes of the talented Canadian Forces pilots and is passionate about recognizing the personal sacrifices that military families make in order to serve their country.

Witzel is also devoted to passing his science knowledge on to younger generations. He loves making classroom visits to talk about environment and spends much of his free time tutoring students of all ages in math and science.

When not looking over weather maps or working with young students, Witzel dedicates his time and energy to his family. From coaching his two young boys in baseball to promoting a healthy family lifestyle with his wife, they have fun being active and love adventuring across Alberta in their travel trailer as a way to enjoy everything that the province has to offer.

04:55
News
Three common food additives to remove from your diet

05:19
News
How to socialize your puppy during the pandemic

04:46
News
Learn more about e-book ‘Avalanche! The Guide’s Guide to Safer Travel in the Mountains’

Wood’s Homes is one of the four charities Global Calgary is supporting during the Month of Giving.  Continue reading →

Pride Without Prejudice: A conversation with Calgary’s LGBTQ community

It is our job to elevate the voices of the community by putting our own voices aside so that others may speak, writes Global News Calgary’s Jordan Witzel. Continue reading →

You don’t have to be a golf nut to find this job fun. Jordan Witzel takes on golf course maintenance. Continue reading →

WATCH: Time lapse of stunning May sunrise in Calgary

The start of the work week brought with it an amazing sunrise in Calgary. Continue reading →

Persistent El Nino cause for dry finish to Calgary winter

March 2016 will go down as a particularly dry month compared to the thirty-year average for Calgary. Continue reading →

Calgary was shrouded in an eerie fog on Thursday morning. Continue reading →

#OurYYC Apprentice: Jordan Witzel assists in the birthing of calves

WATCH: Moon sets in spectacular fashion over the Rockies

Calgarians were able to see the sun rise at the same time as they watched the moon set on Tuesday. Continue reading →

Fresh snow on the way for Alberta and BC Rockies

Jordan Witzel gets behind the wheel of a snow groomer at Canada Olympic Park. Continue reading →

For this month’s #OurYYC Apprentice, I got in the Christmas spirit and attempted to master the role of Santa’s (not-so-little) helper at Southcentre Mall. Continue reading →

Ever wonder what it takes to be a taxi driver? Global Calgary Meteorologist Jordan Witzel is getting behind the wheel to find out. Continue reading →